The project began in 2001 when Washington Mutual (WaMu) engaged PSG to analyze its consolidation options. After analysis of multiple sites, PSG proposed redeveloping an under-utilized site owned by SAM and contiguous to its downtown museum.

The project enabled WaMu, once downtown Seattle’s largest private employer, to keep thousands of employees downtown in consolidated facilities, while enabling one of the region’s treasured cultural institutions to realize its long-term expansion program. The offices and garage opened in March 2006. The SAM expansion opened in May 2007.

Key to this project was PSG’s renegotiation of existing WaMu leases for 750,000 square feet in neighboring buildings. This provided for a gradual exit throughout 2006 to accommodate WaMu’s phased occupancy. This project also required several changes to the City’s Land Use Code to allow the City to accomplish its goal of accommodating this unique corporate and public institution partnership. 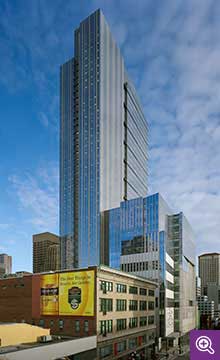