When Pacific Place opened at Sixth Avenue and Pine Street in October 1998, the 335,000-square-foot, $175 million shopping center elevated the retail and entertainment experience to a new level in the Pacific Northwest. Its five levels of shopping, dining and entertainment encircle a crescent-shaped atrium, which is capped by an expansive skylight. On its exterior, Pacific Place is designed to appear as several smaller buildings with individual identities, rather than one solid structure, to make it more inviting and create a better street. A sky bridge across Sixth Avenue connects Pacific Place with the Nordstrom flagship store.

Pacific Place includes the largest retail parking facility in downtown Seattle, with general and valet parking for 1,200 vehicles. Pine Street Group developed Pacific Place, and leased and managed it until its sale in 2014. 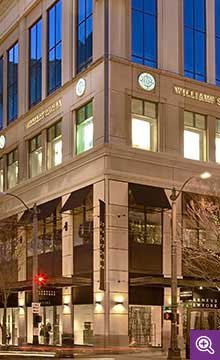