The predecessor to Pine Street Group L.L.C. (PSG), Pine Street Associates, took ownership of the former Nordstrom downtown store and renovated it into new office and retail space with the objective of making the structure inviting and creating a better street. The result was development of two adjoining buildings: the Fifth & Pine Building and the 1505 Fifth Avenue Building.

The five-story, 150,000-square-foot Fifth & Pine Building once composed the northern two-thirds of the former Nordstrom store. It is currently occupied at street-level by retailers Sephora, All Saints Spitalfields, Urban Outfitters and Anthropologie, and by office tenants on the levels above.

The six-story, 80,000-square-foot 1505 Fifth Avenue Building once composed the southern one-third of the former Nordstrom store. It has retail at the base and offices above. PSG leased and managed both buildings until they were sold. 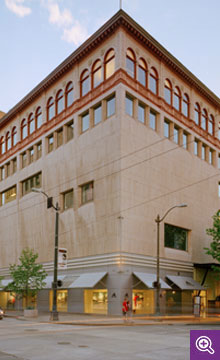